Distinguished Belgian native Apashe continues to set a new precedent for electronic music which each subsequent project in his discography. Following the reimagined release of “I’m A Dragon VIP” earlier this year, the Montreal-based artist offers another stirring fusion of classic orchestral music and electronic music with his new collaborative single “RIP” with Vladimir Cauchemar. To further expand on the collaboration, Apashe and Vladimir Cauchemar star in the haunting music video counterpart for “RIP” which explores impending world doom and the lasting effects of global warming and war. Out now via Kannibalen Records, “RIP” is available across all streaming platforms.

Opening with a graceful organ piano melody, “RIP” slowly escalates with harrowing orchestral elements into a flawlessly layered soundscape. Showcasing his impressive studio versatility, Apashe abolishes genre confines with this latest collaboration with Vladimir Cauchemar as the pair meets at an apex between their signature sounds. Apashe commented on the single, “RIP” was inspired by the cinematic soundtrack of the film Koyaanisqatsi. The repetitive hypnotic nature of Philip Glass’ music was something highly alluring and made Vladimir and I want to take listeners on a terrifying journey.” While still maintaining some of the hard-hitting bass elements that Apashe is known for, “RIP” also traverses into house music sensibilities, offering an even more dynamic landscape for fans and music lovers.

The music video counterpart offers a unique view into the inspiration behind the collaboration while portraying the complex issues the world currently faces. The video opens with a scene of Vladimir Cauchemar playing a grand organ piano as flashes of various instruments and city settings flood in. As the video surges into the build-up, the viewer can experience the mysterious nature of the track while watching various humans look up in awe as a dark object in the sky casts an ominous shadow above. The house-induced melody quickly sets the scene as Apashe and Vladimir Cauchemar look down on the world in Star Wars reminiscent ship in the sky. As servants prepare a perfectly manicured dining table, world leaders and important figures gather around while remaining seemingly unphased by the chaos in the world below. Triggering images of the planet quickly catching fire close the video with the words “Rest In Peace” as Earth meets its demise.

“Met Vladimir Cauchemar at a G7 meeting and we both felt like the world was in a really bad place. After discussing how this whole thing would end we decided to write the soundtrack for the end of the world. This is RIP. The rest is history.”
– Apashe
ABOUT APASHE — Originally from Brussels, Apashe has created a truly unique career path within the electronic music realm since signing to Kannibalen Records over 10 years ago. In just a decade, the Montreal-based producer and artist has developed a pristine hybrid style that resonates with listeners all across the globe and has received over 300 million Spotify streams. His notable releases include the ‘Requiem’ EP from 2018 and his full-length ‘Renaissance’ LP in 2020 which was crafted with a 69-piece orchestra and received 28 subsequent remixes.  More recently, Apashe continued his momentum with his ‘I Killed The Orchestra’ EP in 2021 as he sets the stage for what’s to come with the future of the project. In addition to his astonishing discography, Apashe has also inked a multitude of major sync deals with the likes of Marvel, Netflix, NBA, Apple, HBO, UFC, MTV, and many more. He has also landed placement in Hollywood trailers like Fast & Furious: Hobbes and Shaw, John Wick II, and more.
ABOUT VLADIMIR CAUCHMAR — Masked producer Vladimir Cauchemar is a composer, producer, and DJ hailing from France. He rose to fame in 2017 with the release of his debut single ‘Aulos’ and since then has captivated audiences with his genre-blending signature sound. He has collaborated with the likes of 6ix9ine, Vald, Seth Gueko, and more.
In true Apashe fashion, “RIP” serves as a poetic and cinematic offering for his diverse fanbase. His creative ability to transcend genres shines throughout this new collaboration with Vladimir Cauchemar and leaves fans eager for more new music from the legendary artist.
APASHE UPCOMING TOUR DATES
JUN 4 – Margny-Lès-Compiègne, France – Imaginarium Festival
JUN 5 – Annone di Brianza, Italy – Nameless Festival
JUN 17 – Los Angeles, CA – The Fonda Theatre
JUN 19 – George, WA – Beyond Wonderland Gorge
JUL 15 – Boom, Belgium – Tomorrowland
JUL 16 – Paris, France – Lollapalooza
JUL 16 – Dour, Belgium – Dour Festival
JUL 17 – Transylvania, Romania – Electric Castle
JUL 31 – Montreal, QC – Osheaga
AUG 13 – Budapest, Hungary – Sziget Festival
AUG 14 – Marseille, France – Insane Festival
AUG 20 – St Polten, Austria – FM4 Frequency Festival
SEP 9 – Denver, CO
SEP 10 – Kansas City, MO – Dancefestopia
+ MORE TO BE ANNOUNCED 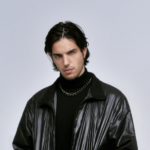