Birmingham Gets Ready For Its Biggest Weekend Of Music This Year 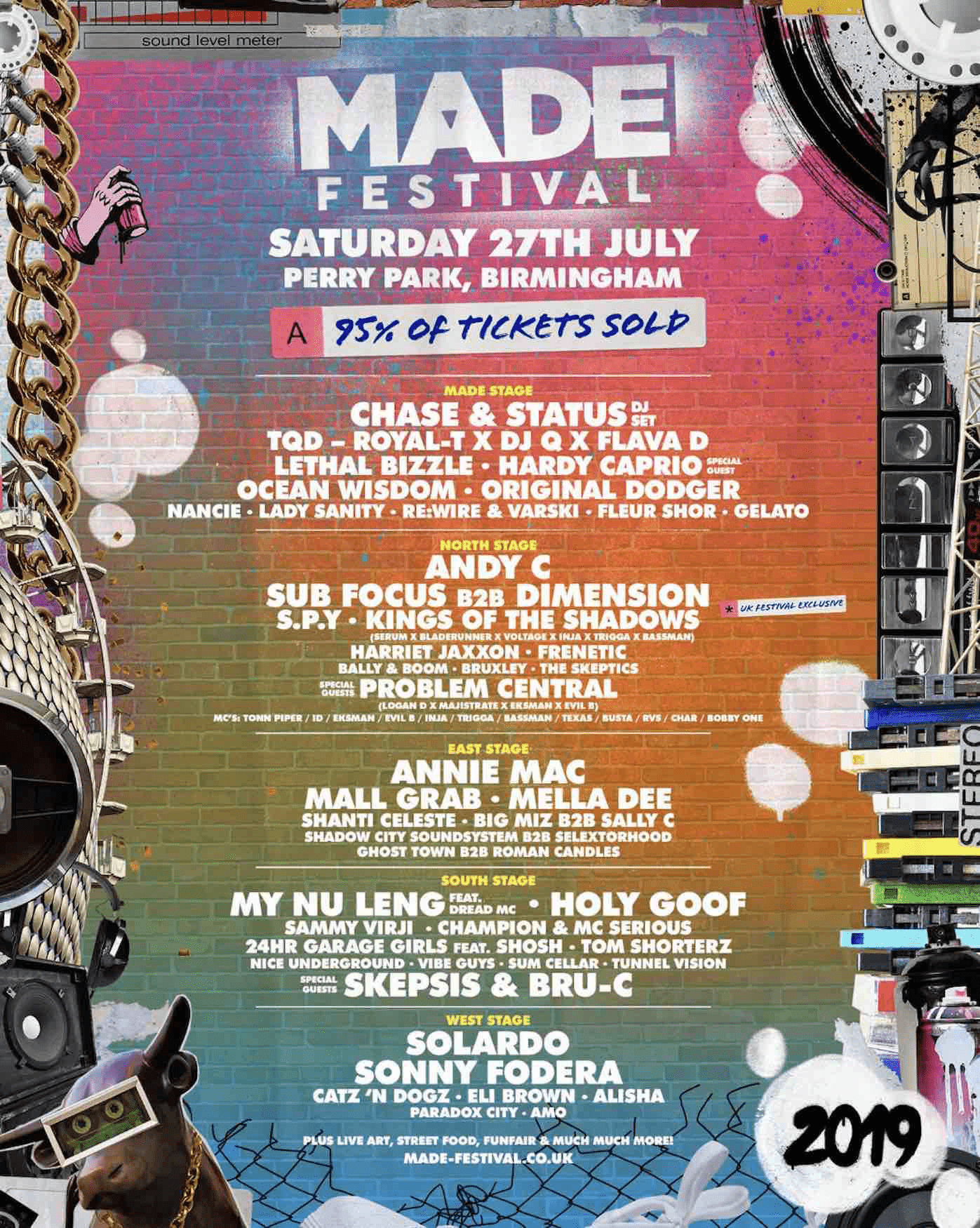 Birmingham Gets Ready For Its Biggest Weekend Of Music This Year

Birmingham is getting ready for its biggest weekend of music this year. Across the weekend of 27th and 28th July, Perry Park, one of Birmingham’s best green spaces, is hosting three huge events. Saturday 27th welcomes MADE Festival, the sixth edition of the biggest festival in the West Midlands, bringing the cream of electronic music to Birmingham, including Chase & Status, Andy C, Annie Mac, TQD, Lethal Bizzle, Sub Focus B2B Dimension (UK festival exclusive) and more. Sunday 28th sees Perry Park divide into two halves of fantastic entertainment. Inner City Live: Birmingham delivers an incredible line up of live music with Doves, Johnny Marr, The Coral and The Twang. Meanwhile Legends In The Park brings together the legendary Birmingham clubbing brands of the 90’s and 00’s, including Miss Moneypenny’s, Flashback, Sundissential vs Polysexual and a main stage themed ‘A Gift From Heaven’. Superstar DJs lining up include Fergie, PUSH (Live), Eddie Halliwell, Jeremy Healy, Lisa Lashes, DJ Hype, Randall and many more.

The last weekend of July really is a summer spectacular for music events in the West Midlands, with MADE Festival, Inner City Live: Birmingham, and Legends In The Park, delivering a weekend of all day and night music in Perry Park, with a non-stop festival vibe, the tastiest street food and tons of entertainment. To top it off, the weather looks set to deliver a weekend of sunshine, so Birmingham music fans are in for a serious treat.
Once again, MADE Festival pulls out all the stops to serve up a stunning line up across six stages for its sixth edition and underlines its status as the West Midlands’ most impressive electronic music festival. Alongside Chase & Status, Andy C, Annie Mac, TQD, Lethal Bizzle, Sub Focus B2B Dimension (UK festival exclusive), are the likes of My Nu Leng, Holy Goof, Solardo, Mall Grab, Hardy Caprio, Kings Of The Shadows, Problem Central, Skepsis & Bru-C, Mella Dee, Ocean Wisdom, Original Dodger and more. Next to the electrifying soundtrack, Birmingham’s finest graffiti artists, plus an array of award-winning street food vendors, specialist set designers and plenty more art and culture, make MADE one of the UK’s most essential summer festivals. The final few tickets are available at www.made-festival.co.uk from £49.50 + b/f.
Inner City Live: Birmingham brings some of the UK’s best-loved indie legends together for an all day festival of quality tunes and entertainment. Doves return after a 9-year hiatus for their only West Midlands gig, supported by ex The Smiths icon, Johnny Marr, Liverpool favourites, The Coral and Birmingham’s own, The Twang. This is an unmissable line up and part of a wonderful all-day festival of live music (1pm – 9.30pm). Add in tasty street food, cocktail bars, funfair ride and more and you’ve got the perfect Sunday. Tickets are still available from just £39.50 + b/f from www.innercitylive.co.uk/birmingham.
Legends In The Park celebrates the Midlands club brands which dominated the UK clubbing landscape through the 90’s 00’s and beyond, alongside DJ legends who made their reputations at these events. The main stage, themed ‘A Gift From Heaven’ will provide a tribute to the high octane trance super clubs who became globally influential, Miss Moneypenny’s will provide their trademark glamorous house, Flashback will deliver drum & bass, jungle and hardcore, while two of the biggest hard house brands ever, Sundissential and Polysexual, go head to head. This huge all-day event (11am – 10pm) lines up a veritable who’s who of original superstar DJs. Alongside the likes of Fergie, PUSH (Live), Eddie Halliwell, Jeremy Healy, Lisa Lashes, DJ Hype, Randall, clubber will enjoy the likes of Mauro Picotto, Scot Project, Tall Paul, Sonique, Freemasons, Jon Pleased Wimmin, Micky Finn, Ratpack, Shades Of Rhythm (live PA), Lisa Pin Up, Andy Whitby, Anne Savage and many more. The final tickets are available from £39.50 + b/f from www.legendsinthepark.com.
All three of these huge events are operated by Midlands event specialists Weird Science who continue on their mission to bring word-class music events to Birmingham.
The second city is all set for first-class entertainment with some of the biggest bands, most talented DJs, street artists, award-winning street food, cocktails, funfair and the best festival fun with friends in the beautiful greenery of Perry Park. The 27th and 28th of July is Birmingham’s biggest weekend of music.