Birmingham rapper Stardom is back with another banger in the form of ‘La Vida Loca’, a summer anthem with a bouncy melody and a catchy hook, proving time and time again he is one of the strongest lyricists to come out of the 0121, adding to the many reasons that Stardom should be on your radar.

In his latest visual Stars talks about living ‘La Vida Loca’… with yachts, mountain villas, Lambos and beautiful senorita’s showcasing the rapper enjoying his best life, with varying lyrics set as a reminder of the hard times he’s come from. A guaranteed club banger, get ready for the next Summer sizzler.

The emcee has made a major impression after peppering the scene with releases over the past few years including tracks like ‘Gucci’ which has been streamed almost 2.5million times on Spotify, you rarely find a visual with less than 1/2 a million views. Having now received radio play on Kiss Fresh, BBC 1xtra, Rinse FM, Capital Xtra and even Radio 1 plus playlist support through Apple and Spotify.

Following a number of releases to date, ‘La Vida Loca’ is part of a collection of music, prepping you for an EP due to drop in September. Known for his gritty, genuine, raw street lyricism and his deep roots in Birmingham, Stardom continues his rapid rise to the ‘urban’ mainstream. 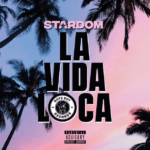