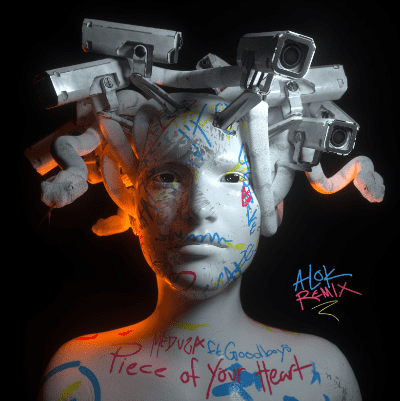 Brazilian DJ and producer Alok has delivered a remix of ‘Piece Of Your Heart’, the summer anthem from mysterious production trio Meduza, out Friday 7th June via Universal.

Maintaining the grooving bassline and infectious vocals of the original, Alok ramps up the tempo by throwing in a euphoric drop – instantly enhancing the track’s dancefloor prowess.

Meduza’s debut release ‘Piece Of Your Heart’ has taken the charts by storm since its release in February – spending 8 weeks in the Official UK Top 40 charts, 7 weeks on BBC Radio 1 A List and peaking at #1 in the UK Charts and Billboard Dance Club Charts. First picked up by the BBC Radio 1 Dance Anthems show, the track has also received a massive 93 million streams across all platforms and was featured on some of the biggest Spotify playlists including Today’s Top Hits, Hot Hits UK, Top Hits Deutschland, Pop Rising, Dance Rising and Mint.

Collaborating with dance music legend Steve Aoki for ‘Do It Again’ and Australian innovator Timmy Trumpet on ‘Metaphor’, 2019 has already been a monumental year for Alok. Also releasing global hit ‘All The Lies’ earlier this year, a collaboration with pop sensation The Vamps & Felix Jaehn, which has amassed over 28million Spotify streams and counting, the Brazilian producer continues to place himself at the forefront of electronic dance music. This preceded a flurry of releases on Spinnin’ and Universal in 2018, leading to his highest ever finish in the DJ Mag Top 100, coming in at #13. Particularly influential in Latin America, Alokhas also received a nomination for ‘Best DJ’ at the annual MTV Millennial Awards, while being the only Brazilian to reach the 1 billion streams mark on Spotify.

With his remix of ‘Piece Of Your Heart’, Alok places a greater dancefloor focus on an already acclaimed track.