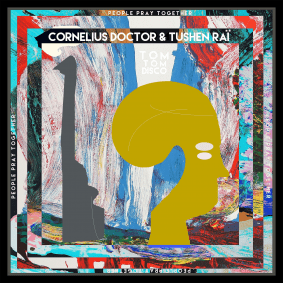 Opener ‘Nana’ is a tropical disco groover, with slow drums but colourful samples and effects that make it feel alive and organic with mind melting leads that take you on a trip. Jonathan Kusuma is a leader of the underground music scene in Jakarta, Indonesia and signed to I’M A CLICHÉ, Love Is On The Rock and Optimo music. His rugged remix is built on dirty bass rumbles with stark hits driving it along late into the night.

Tushen Raï & Cornelius Doctor then offer ‘Spell On You’, a brilliantly unhinged track with wonky grooves and bass, popping melodies and colourful pads that with light up any set. This one gets remixes by Roe Deer, a key name on the scene who hails from Latvian and here layers in freaky spoken words, chops up the beats and ups the playfulness to make for a superb weird disco cut.

Two digital bonus tracks include a remix from Russian duo and ИДА label bosses Uninc & Kolomensky plus Leonor, a Mexican artist living in France and close friend of Tushen Raï & Cornelius Doctor, and both take the original in dark and absorbing new directions.

This is a wildly diverse and standout package of inventive club sounds from all involved.