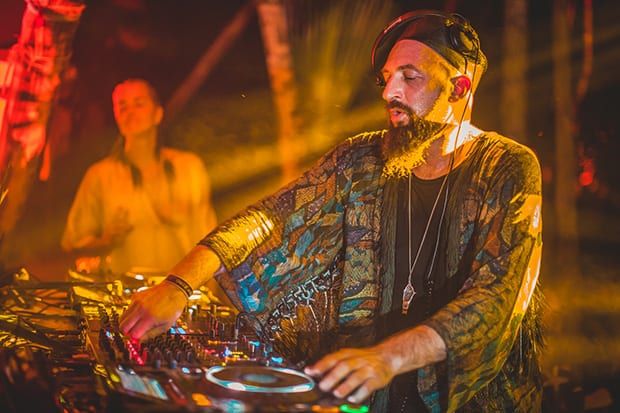 On January 12th Papaya Playa Project Tulum will be transformed by an impressive production to recreate the imaginary universe of “Dancing into Dreams”. An immersive adventure designed to explore new levels of party experience where the crowd will live a dreamlike odyssey through art, performance and music.

The party presents a massive line up headlined by Damian Lazarus in his only appearance in Tulum. After organising the successful Day Zero Festival, Damian Lazarus joins the Storytellers’ team for his unique date in Riviera Maya this season, bringing with him some of his most special friends and true music storytellers such as Art Department – who’s one of the most respected names of the electronic underground scene today, the godfather of the desert’s sound Behrouz, Dance Spirit – undoubtedly one of the breakthrough artist of 2017, and Metrika – Mexican talent made in Crosstown Rebels.
Artistically produced and surrounded by the tropical jungle, palapas and situated by the Caribbean Sea, “Dancing into Dreams” will also present a massive mise-en-scene, including clowns, jugglers, gypsies, pirates, shamans, painters, sacred musicians, fibonacci fire, self customised art, organic food and lots of good music making the audience become the major character of an incredible adventure.
On January 12th from sunset to sunrise Papaya Playa Project hosts “Dancing into Dreams” by Storytellers Ibiza. Come and meet our tribe of performers, clowns, jugglers, gypsies, pirates, shamans, artists and a dream full of magic for you to dance into it!

THE STORY BEHIND THE PRODUCTION “DANCING INTO DREAMS”
“Dancing into dreams” is an immersive experience in which the audience become part of the story behind it. The story is about a child –Maya- and a dream inside a dream. A dreamlike odyssey that stays in her memory forever: a dream where magical creatures from far away danced in paradise. They belong to the four tribes of the universe and together they celebrate life: they are irresistible, sensual, wise and with them Maya will discover the power of imagination and freedom, a story that evokes our childhood fantasies and makes us free.

WHO ARE STORYTELLERS IBIZA
Storytellers is formed by a team of creative professionals and authors of entertainment projects that have revolutionised the concept of a party in Ibiza and worldwide in recent years with their particular vision of the expressive possibilities of art and performance combined with electronic music. Storytellers is the author of successful projects, recognised both by the public and the industry, such as WooMooN (DJ Award 2016) and Acid Sundays (Dj Award 2015). In 2017 Storytellers made its debut in artistic direction with Oceanic Ibiza Festival, a bespoken event that was sponsored by the NGO Oceanic Global in collaboration with DJ Solomun (DJ Award 2017).