Electro-pop songstress, Eulene has released her long-awaited self titled debut EP, on the 11th of December via GoGoLove Records. The EP was mixed by Grammy-nominated mix engineer Erik Madrid (ZAYN, Demi Lovato, Charli XCX), composed and produced alongside prolific songwriter Angelo Petraglia (Kings of Leon, Taylor Swift and Adam Lambert) and master engineer Chris Gehringer (Dua Lipa, Lana Del Ray, Rihanna). Eulene’s work has received significant attention with the EP premiering via Wonderland Magazine and previous support from the likes of CLASH Magazine, Rolling Stone India, Popdust, Celebmix, and Glamglare as well as making the “Breaking Pop” playlist on AppleMusic. The stunning EP will be available to purchase on vinyl as well as digital copies.

Eulene’s powerful, feminine attitude radiates throughout the EP. Unrestrained in her sonic capabilities and using edgy production styles to lure fans in, the singer takes songwriting to the next level. The EP manages to take a variety of genres and intertwine them, providing a continuous flow of unexpected magic and seduction. Denying any expectations and rising above all hopes, Eulene is an entrancing pleasure to listen to as it invariably draws listeners into a dramatic and self-revealing world.

The singer’s early creativity was informed by her New York City upbringing, and she is currently based in Nashville, Tennessee. Eulene’s free-spirited approach to music is reminiscent of groundbreaking acts like Björk, M.I.A. and Lorde. Her electro-alt-pop sound can also be compared to the dark undertones of Grimes, the dance-inducing vocal hooks of Robyn, and the trendy St Vincent while still incorporating more experimental elements that you would find in an artist like Son Lux.

“The vision of this project pulled me to create the music and the full picture arrived to me clearly, before I even wrote a single song. The process was a new one for me and my writing partner, Angelo Petraglia. Merging different musical genres that I love was probably the most defining directive of the EP. This included classical music to disco to pop to choral music to angular and industrial sounds. Incorporating these musical accents around the bones of the raw songs was an amazing, creative experience. The emotional arc of the EP includes digging for the truth in sacrifice, grit, love, femininity, despair, loss and the hypnotic attraction of power.” Eulene tells us about the creation of her dynamic EP. 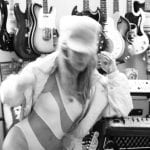