Singer-Songwriter Don Mai is back with the new single ‘Better’. The follow up to ‘Caught Up’ which was released last month, Don once again puts his pop sensibilities on display. Influenced by the likes of Juice Wrld and Ed Sheeran, Don’s personal style of songwriting see’s him open up about his emotions and feelings whilst still retaining a catchy and accessible element to his music.

‘Better’ see’s Don bring together processed guitar, piano, atmospheric synths and electronic beats under his stylistic breathy vocals creating a moody pop soundscape. Elevating the track with the earworm chorus which hammers home the melancholic nature of the track, Don once again demonstrates his potential as an up and coming pop artist.

Starting off as a classical pianist, Don soon moved onto learning acoustic guitar and learning to sing before discovering his love for Pop music and beginning to write his own songs. Having studied music performance at university, he decided that music was more than just a hobby and began to release his music for the world to hear! With rave reviews from the likes of Music Crowns, Obscure Sound and AAA Backstage already under his belt, Don Mai’s new single ‘Better’ is released June 11th. 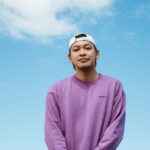