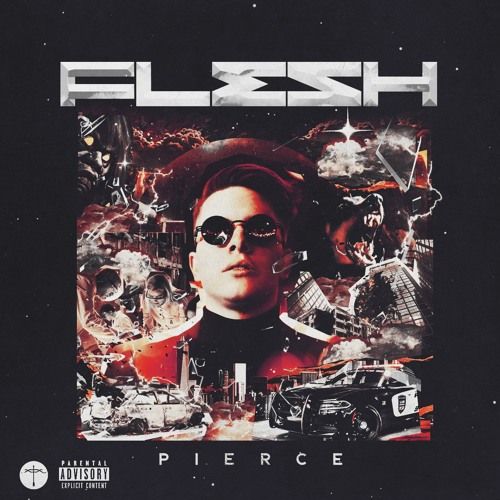 After months of agonizing hints about his thrilling, dark debut EP "FLESH," PIERCE has finally unleashed the full seven-track saga. Featuring previously released tracks "Death Note" and "Tyrant," listeners are finally able to piece together the bone-chilling story of PIERCE's abduction, abuse and attempt to escape. "FLESH" begins with PIERCE's warped voice in a cry for help, stating "If you hear this, I'm alive…I don't know who these people are or what they want, but they're after my FLESH." The EP's first track "Simulation" begins with deceptively dreamy melodies as PIERCE is thrust into a mind-altering world, before all hell breaks loose when the system malfunctions and PIERCE is freed from his virtual prison. Follow along with his life-or-death attempt to escape with both his FLESH and his soul through a sonic soundscape of stabbing synths, throbbing bass, and menacing sound effects. "FLESH" is an assault to the senses that will have you on the edge of your seat – or tearing up the dance floor – for its entirety. Prepare yourself to enter PIERCE's dark world and press play on "FLESH." You've been warned….

Austin Pierce Guerra, better known as the maestro behind PIERCE, makes the type of music that both instills terror in soccer moms and bloodthirsty euphoria in bassheads – the type that sounds like it could come straight from a steel factory, yet drives thousands of bodies into a frenzy on the dancefloor. While perfecting his craft at Icon Collective production school, PIERCE learned the ropes from some of the best minds in the business. After graduating in 2015, he had his debut EP "Audi" signed to Spinnin' Records within a year, then went on to release "Hijack" on Insomniac's Bassrush label in 2018. "FLESH" is his most ambitious project yet, fusing the mind of a storyteller and producer together to create a dark sonic tale of survival. PIERCE has established himself as an artist in his own category, and we can't wait to see where the rest of his journey leads.