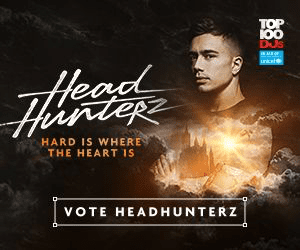 by ihouseuadmin
0 comments
Last month Hardstyle’s biggest stars, Headhunterz played the acclaimed closing set at the 2019 edition of DEFQON.1 to a rapturous reception. Known as the ‘Saturday Endshow’, the honourable live slot within hardstyle also saw him premiere his new track‘Orange Heart’ on Q-dance Records; a nod to his first festival anthem ‘Scrap Attack’back in 2009 and his own tribute to a scene and community he loves. Now, 10 years later,‘Orange Heart’ will be a beacon for hardstyle lovers the world over, for devoted fans that live and breathe the harder end of the electronic spectrum.

Collaborating with Sian Evans (lead singer of Kosheen with hits such as ‘Hide U), who opens the track with her distinguishable and soulful vocals, ‘Orange Heart’ is deceivingly delicate as the gentle piano chords provide a base for the melody to glide smoothly over the top before an emotive chord progression rolls out. Adding in a boisterous, white-knuckle ride of a drop, the track is loaded with mythical symbolism before a rip-roaring 150bpm bounces in, taking over the listener with powerful passion. Impressively, in less than 48 hours, ‘Orange Heart’ has received over 135,000 views on YouTube and earned more than 100,000 Spotify plays, alongside claiming the#1 position in the reputable hardstyle.com chart in one day.

His successes as a producer and DJ have led to him being placed in the Top 100 DJs Poll every year since 2010 and always being placed as the highest artist in hardstyle. He rose 5 places in last year’s Poll to number 28 and also embedded himself further into the live scene in Asia, playing at all of the hottest clubs across the continent including Zouk, Zentral, Octagon and receiving recognition from MTV Asia, as he continues to dominate the market (with specifically strong reach in China) and expand on the brazen, no-holds-barred elements of his music.

With more new music dropping imminently and a slew of headline tour and festival dates this Summer, make sure to cast your vote for Headhunterz in the Top 100 DJs Poll: top100djsvote.djmag.com !

Having been at the forefront of the hardstyle scene for more than a decade now, Headhunterz still continues to pave his way through the genre. Rewind to 2003 and after visiting one of the first hardstyle parties of its kind, QLIMAX, the artist – real name Willem Rebergen – experienced a spark within him. Exerting all of his energy into his goal, it wasn’t long before he began to reap success and in a turn of events, resulted inproducing the official anthem for QLIMAX 2008; the very event that had inspired him just five years prior.

Gaining a blazing momentum and redefining the hardstyle ‘sound’, Headhunterz career was beginning to soar as tracks like ‘Scrap Attack’ in 2009, the anthem for the world’s largest hardstyle event DEFQON.1 changed the course of his career. Consequently, catapulting him to becoming a global-phenomenon for the harder generation. Hard-hitting solo tracks and collaborations on the likes of ULTRA, Armada, Doorn, Spinnin’ andMainstage Music, alongside a versatile troop of artists including Hardwell, W&W, Krewella, Steve Aoki, R3hab, have led to him becoming the most in-demand harder edged producer in the world.

Which is a statement backed up when looking over the success of his recent tracks, like for instance ‘Oxygen’ which has already surpassed 2 million plays across Spotify and YouTube, as well as his total number of online YouTube views almost reaching 120 million on his own artist channel alone.