The London based rising star solidifies her circle as she Chops The Bummies in a track that weighs in on the importance of having the right people around her. Setting the pace with her distinctively punchy and assertive flow, J-Onyx teams up with producer Ty Metronome on the latest release.

Spitting over a hard-hitting beat, the rapper serves up her natural gift for rhythms and flows, as she delivers a straight-talking single. Bringing her alpha-female flex and demonstrating the levels at which she’s quickly establishing herself at, she puts her stance on sexualisation and independence on full display.

Earlier this year she stomped onto the scene with her official debut single titled ‘Can’t F With’. A poignant single, she showcased her hazardous flows, commanding attention with every bar and landing early support surrounding the single on BBC 1Xtra, KISS FM and Apple Music. She also grabbed the attention of gatekeepers such as DJ Target,  DJ Semtex on Capital XTRA and championed by stations such as Westside Radio, OnTop FM and Amazing Radio. The single was also the catalyst that led her onto the radar of Charlie Sloth’s ‘Hood Heat’ and Wonderland Magazine, which featured her as one of their New Noise artist selections. Praising her lyrical skill and presence as a newcomer Wonderland noted that “making your debut as a new artist isn’t easy, but rapper J-Onyx is making it look effortless”.

Discovering music as her calling, J-Onyx first practised her skills to groups of friends before circulating in the UK rap scene with her off-the-top-of-the-head freestyles, which she dropped on Instagram. Gaining a buzz around her name, her freestyle for ‘Murda Murda’ was sourced by KISS FM Hip Hop legends DJ Shortee Blitz and DJ MK to spin on their groundbreaking show, ramping up the fire within her and around her name. Now continuing her rise and increasing the levels with every step, J-Onyx ‘Chop The Bummies’ as she heads for stardom. 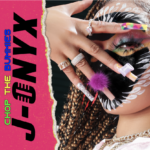