With Pemmican, La Fine Equipe pursues its sound explorations and solar collaborations by inviting the French/Rwandan artist Gaël Faye on a track blending genders. Known as a survival food used by the native Americans for their polar expeditions, followed by numerous adventurers packing it into their bag, Pemmican echoes today’s world survival facing Humans and environment drifts.

With a sound sailing between electronic and organic, La Fine Equipe rolls out the red carpet for Gaël Faye’s inimitable sharpened writing. From the first words spoken by the French/Rwandan singer/writer/director, we let ourselves sank in a dreamed universe. Through the phrases, Gaël Faye tells his hopes of a new world rising on today’s sufferings.

“We live in times of peril and imminent disaster. Rational spirits despair of the times, but poets as always create magical visions of a new world ready to blossom, even if it means they are hallucinating shamans.” Gaël Faye

On a powerful and percussive beat elevated by transcended voices, Gaël Faye’s flow don’t give us any other choice than get aboard this dream and tosses us with cascades of punchlines and aerial choruses.

After Orifice Vulgatron (Foreign Beggars) who was the guest of the first single « Cycles », and Madjo’s haunting voice on “E. V. A.”, “Pemmican”is the perfect following of La Fine Equipe’s album « 5th Season », « Pemmican » keeps us in this imaginary universe where the quartet blended audacious productions from hip hop to electronic, with various collaborations to make them shine.
New stone bring to La Fine Equipe next LP, « Pemmican » feeds our will to meet again with La Fine Equipe this fall.

Made of four beatmakers (oOgo, Chomsky, Mr Gib and Blanka), La Fine Equipe has been under the spot of the French electronic scene since the beginning. Well established in the hexagon, the four beatmakers drove the attention of medias and prescribers such as Arte, MixMag, Fact, Tsugi, Trax, Radio Nova or Boiler Room who invited us to represent the French electronic scene for two gigs in Paris and London. 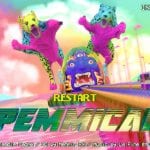