London-based rock soloist Drew Davies has shared his single ‘Mrs. Taylor’ set for release on 1 November lifted from his upcoming debut EP via AD1. The track has just premiered via Pure Grain Audio. The EP was mixed by Steve Honest (Oasis, Eurythmics) and mastered by John Webber (David Bowie, Super Furry Animals). Davies has been featured by the likes of Clash Magazine, Atwood Magazine and Music News amongst others. He has seen radioplay from BBC Radio York’s Introducing with Jericho Keys, BBC Wales, Radio X, and as a previous member of The Mercy House, the band saw support from Kerrang, Classic Rock Magazine, Metal Hammer, MTV and BBC Radio 6 and Radio X. He has toured extensively in the UK and Europe, had music featured on the Rock Band video game, played Download Festival, London’s Scala and the iconic Troubadour.  He has toured UK and Europe extensively as a member of various bands and played Bloodstock, Download Festival, El Kanina Rock Festival (Spain), London’s Troubadour,  and opened for Biohazard at a sold out Scala show.

Hailing from South Yorkshire, Davies comes from a long line of singers and musicians. He has spent the better part of the last decade treading the boards of venues and festivals across the UK and Europe with various bands, working in musical collaborations, writing for other artists and singing in session gigs to get by. Through successes, setbacks and everything in between, he has poured himself into his musical labours, and has now produced his most personal work to date.

Pulling from a wide array of influences, Drew Davies is inspired by everything from 50’s rock n’ roll to electronica, citing acts such as The National, Scott Walker, Vangelis and Tom Petty. From this palette of familiar reference points, he has created a genre-bending and timeless sound that bears semblance to the likes of Sam Fender, Future Islands, and The War On Drugs.

On ‘Mrs Taylor’ Davies displays impressive vocal polish, bringing the lyrics colorfully to life against a full musical arrangement. Propelled by energetic instrumentals, the songwriting and hooks are brilliantly written and expertly executed. Thematically, the track traverses melancholic subject matter, but Davies tackles it with gusto and positivity, choosing to highlight a memory of life, rather than a reminder of our inevitable mortality.

Davies gives some background to the track: “Mrs Taylor is a song about childhood. Growing up in the South Yorkshire countryside it wasn’t always easy to get around. My oldest friend’s mother Mrs Taylor used to ferry us around a lot and take care of us if we ever got into scrapes. When I learned of her passing I immediately started writing lyrics and music; ‘Mrs Taylor’ was written then and there as an ode to childhood and to those who took care of me in those formative years.” 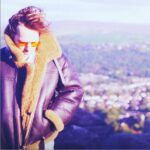