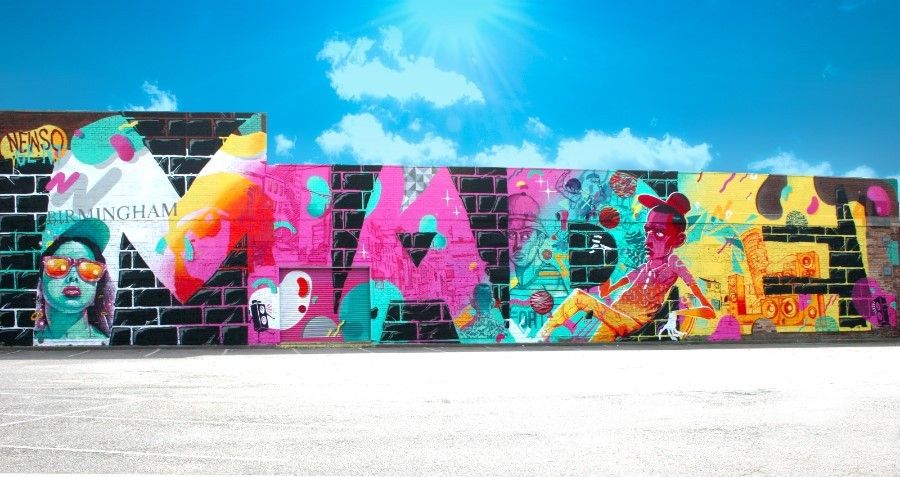 With only a matter of weeks to go until the 2 day event taking place in the Digbeth Triangle 25-26th July, 2014 Best Metropolitan Festival nominee, MADE Birmingham reveals its very own 400m graffiti wall, lovingly crafted by art collective, Fortyeights as well as details of the multifaceted night time event, MADE…My Night.

Fortyeights is an arts production and independent commercial creative company. It was  started by two Birmingham born and bred graffiti artists, Gent and Newso. Its focus is on commercial commissions of their collaborative mural work.

Gent and Newso have collaborated on murals for over a decade.  They have painted together and been involved in urban art for more than 18 years.

They continue to stay close to their roots with their graffiti work. Recognised nationally and internationally, the duo have spent the last seven years making Digbeth more inspiring.

“We’ve been looking forward to this commission, it’s a good feeling to have such an open brief and have the chance to create art that’s representative of our strong visual identity. We’re both passionate about our home city and hope that this wall cheers and inspires others. The mural that we are painting over this week, we painted last year and based it on our cities motto, ‘Forward’.  A big thanks to Custard Factory and Rainbow Venues for allowing us the wall and giving us continued support” Newso

“What we hope to represent through the design is the vibrancy of MADE and of our area of Birmingham, Digbeth. Over the years we have been working hard to transform this area with our artwork and open up new walls to paint. We’ve tried to help make Digbeth similar to those places we found on painting travels across Europe. We get invited to other cities to paint these sorts of walls so its good to have more opportunities to have our work brought back to our own city” Gent48

MADE are also announcing details of their official night time event, MADE…My Night, which will take place from 11:30pm to 6am on Saturday 25th July after the festival at a host of venues across the city. After hours crowds will enjoy a line up of acts from the main event as well as a number of special guests outside of the festival programming.

Defected in the House will bring the noise with sets from DJ S.K.T, Sonny Fodera and Sam Divine, the event brand arm of the famed, Defected Records will be throwing their after party at The Warehouse. Revellers who chose Sunrise Party’s blowout at The Terrace will enjoy a special sunrise set from Claude Vonstroke back to back with Doorly as well as music from Lee Foss and Santero. Seedy Sonics will be holding their MADE…My Night party at Blackbox with the likes of Kove and Endor topping their bill. And finally, The Garden will see DJ performances from  a number of DJ’s including the winner of the MADE Mixcloud DJ Competition. One ticket gains you access to all the events.

**VIP Ticket holders will gain free access before 1am**


Fourth Release and VIP tickets for Saturday and £5 tickets (proceeds to charity) for Sunday are on sale now from http://www.madebirmingham.com

After the success of last year’s debut, MADE Birmingham is proud to announce its return to The Digbeth Triangle on Saturday 25th July. In association with Rainbow Venues, the midday-to-midnight event has revealed its first wave of names to a line-up promising an exciting and eclectic mix of both live music and DJ performances that showcase the second city’s reputation as a groundbreaking, innovative and diverse creative hub.

Topping the bill this year and playing out to a MADE crowd for the second year running is Detroit heavyweight MK. The multi talented producer, DJ and songwriter first learnt his trade in Kevin Saunderson’s studio, quickly building a reputation for his distinctive, club-focused sound and timeless production work.

He’ll be joined by Wilkinson – a DJ who’s performed in over 65 countries, produced with the some of the world’s most infamous hit-makers and topped the UK singles chart with his rework of Lou Reed’s ‘Satellite of Love’ – all while producing under half a dozen different production monikers.

In a testament to the diversity of this year’s bill, a fluid mix of genres will also be represented – from drum & bass via Shogun Audio boss Friction and talented production duo Matrix & Futurebound, to techno via legendary DJ and Dirtybird label head Claude Von Stroke and even the blurry, hip-hop leaning sound of Warp affiliate Nightmares on Wax.

On an international front, MADE is also keen to showcase artists from every corner of the globe, whether it be Canada’s Heidi, BBC Radio 1 DJ and head of the iconic ‘Jackathon’ party brand, Ibiza Rocks’ resident and Cajual Records mainstay Doorly.

Festival Director, Pete Jordan commented: “After the amazing debut of MADE Birmingham in 2014, this year will see the festival step up a few gears and become something that the city will truly be proud of, showcasing some of the world’s most important electronic music acts in the heart of industrial Digbeth. No other event in the UK is held in unique industry surroundings such as these.”

Lee McDonald, Managing Director of the Rainbow Venues commented: “Utilising the Digbeth Triangle we have developed the site stretching from the far end of Digbeth High Street, up Adderley Street and along Lower Trinity Street. In close collaboration with the city council we have effectively minimised any disruption to local residents. The Rainbow is proud to be part of an event that highlights the level of creative talent within the city, and propels it on to a national platform.”

With a solid lineup of both fresh and respected musical talent and even more to be announced over the coming months, the unique, metropolitan event is set to make its mark on summer 2015.