The newest release from the Protocol Recordings camp comes from veterans Teamworx and debutant on the label MR.BLACK. Their collaboration “We Are Lost” rides high on minimalistic progressive melodies and a steadily grooving bassline, allowing the soulful and slightly ethereal vocals to add emotional meat to its sonic experience. Feeling just as at home played through your headphones, “We Are Lost” carries both radio and dancefloor appeal. The collaboration is the first between the Israeli artists; Teamworx is known for their collaborations with Nicky Romero and some high profile remixes. MR.BLACK has previously released on Revealed Recordings, Spinnin’ Records, Musical Freedom, and Dharma and did an official remix for Tiësto’s “Boom.”

Founded by Nicky Romero, Protocol Recordings is one of the leading imprints for innovative house music; it boasts a roster of heavy-hitters complemented with immensely talented up-and-comers, all with a diverse range of sounds that are guaranteed to light up a dance floor. “We Are Lost” marks Teamworx’s epic 10th single on the label since the Israeli exports first exploded onto the scene with Corey James and their track “Make The Crowd Go,” which received massive support from industry heavyweights, such as Steve Angello. They’ve collaborated with Nicky himself on “Champion Sound” and “Deep Dark Jungle,” as well as remixes for his tracks “Only For Your Love” and “Ring the Alarm.” In 2018, they played at EDC China as well as Protocol’s showcase at ADE, and this summer performed at Ultra Korea. MR.BLACK is most known for his original single “Boomshakalaka” and his remix of Tiesto’s “Boom,” both of which have amassed over 3M streams on Spotify. He has garnered support from industry heavyweights including Tiësto, David Guetta, Martin Garrix, Dimitri Vegas & Like Mike and his home-label boss Hardwell. On Hardwell’s Revealed Recordings, MR.BLACK’s hits “Party People” and “Hu-Ha” hit number 1 on the Beatport charts. “We Are Lost” combines these two extraordinarily talented artists for the first time, and we can’t wait to see what the future holds for each of them. 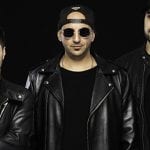