Notaker On Remix Duty For Haywyre Notaker On Remix Duty For Haywyre

Following an eventful summer packed with festival appearances and a series of headlining shows, Notaker has unveiled an official remix for Haywyre’s ‘Tell Me’.  The single, originally forming part of Haywyre’s popular 2018 EP Panorama: Form, features Notaker’s signature glitch-infused soundscape complemented by enthralling and glittering synths. “Tell Me (Notaker Remix)” is available to stream now across all platforms.

Earlier this year, Notaker made a return to his home label, Monstercat, with the release of a stunning sophomore EP, PATH.FINDER. The emotionally-packed project has since racked up over 1 million streams across all streaming platforms. Notaker is now gearing up to treat fans to a series of unreleased cuts beginning with a flip of Haywyre’s “Tell Me”. The remix sees him inject his unique, glistening touch into Haywyre’s groovy record. A series of throbbing synths subtly build up to climax into an explosion of swirling kicks that can only be described as uniquely Notaker. The finished product provides listeners with an emotive journey through the inner workings of the St. Louis-based producer’s universe.

Looking back at a successful year comprised of his debut festival performance, a string of headlining shows, and the release of some of his best work yet, Notaker is now gearing up for the release of yet another EP. To stay in the loop regarding release dates and upcoming show announcements, follow him via his socials! 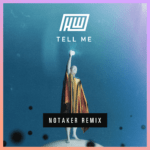