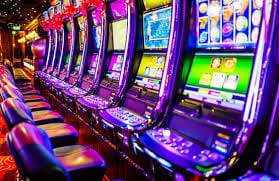 Slot variance or slot volatility typically refers to the same thing in the world of casino slot games when you deposit and play. In fact in nearly every review you will find some reference and whether the game is of a high or low variance. Yet strangely enough, a large proportion of players wouldn’t be able to sit down and explain to you exactly how it affects their play. In fact the majority of slot game players don’t really understand what it means or even how it works. That’s where this article will change that. In simple terms so that absolutely anyone can understand, slot variance will be explained so you can grasp exactly why it’s so important.

The Difference Types of Slot Variance

Slot variance is how much risk the slot game is to play. Practically speaking, it’s how often the player is likely to have a change in luck and win. Slot variance just doesn’t just differ by frequency of wins but also refers to the amount won too. So high variance slots can have long periods of few to zero wins but when there is one, the reward is normally extremely high. Low variance games are the polar opposite. Instead of long dry periods between wins, matching combinations occur much more frequently. The payout amount however is normally drastically less. A simple way to remember this is the lower the variance the lower the risk of play. Both types of slot variance games have benefits and negatives. What game suits a player best depends on a range of factors that all help determine the likelihood of them winning.

High variance slots are much more suited to the high rollers of the slot spinning world. This is because high variance slots must be played with a bank budget to match. Players need to have enough funds to support those prolonged dry spells where things can seem extremely low. It can be tough to play and require nerves of steel so high variance really isn’t for everyone. However, if you can then the rewards more than make up for things. Jackpots can be mega money and quite often include bonus rounds that can payout life-changing amounts.

Low variance on the other hand is everyone’s friend. It doesn’t matter if you have a small budget. There are slot games now with minimum bet limits of less than a pound. Sure the payouts won’t be such life altering figures but they will certainly fill the wallet. Low variances are also perfect for building a bit of pace. Too often players rush in, lose their money quickly and rarely get a chance to get into things. The advantage of low variance means players can start small and build up their bets as they get a bit of confidence and the rhythm of playing.

So now you understand the difference between high and low variance you’re already more knowledgeable than the majority of amateur slot players out there. You’ve improved your odds by just knowing how variance works and how you can use it to your advantage. So what are you waiting for? Get out there and start spinning.