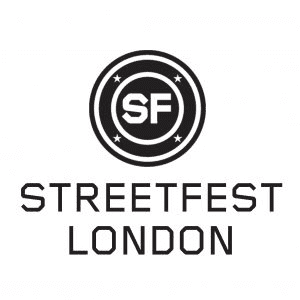 Emerging out of the cutting-edge counterculture arts scene in east London and now in its 11th year, the country’s premier street culture festival consistently champions the maverick artists and unsung heroes from the vibrant local creative community. StreetFest took to the road in May of this year for its hugely successful, inauguralStreetFest Leeds with DJ Semtex headlining.

StreetFest has carved out its own niche with its strong music lineups over the years, with a mix of both established and emerging talent and has long prided itself to be early champions of some of music’s hottest names. Previous live artists have included Afrikan Boy, Stush, Goldie, Miss Dynamite, Loyle Carner, Oddisee, Professor Green, HUDSON, Wretch 32, Devlin, Maverick Sabre and Ghost Poet.

Following the success of StreetFest Leeds and last summer’s legendary 10th anniversary, StreetFest returns with a ‘feast of the senses’ in its beloved east London, for an epic 8-hour celebration of London’s best names in street dance, urban music and live arts for the whole family to interact with at Oval Space.  With programming across the expansive Oval Space, highlights include:

Emerging out of east London, the StreetFest concept and ethos has uniquely been about a community of ‘counterculture’ creatives, celebrating DJing, MCing, graffiti, B-boying, as well as skateboarding, parkour, body art, BMX and more.

StreetFest founder, Bayo Alaba said “I’m proud to say that StreetFest is the biggest champion of British street culture. The scene just attracts more and more young counterculture creatives and StreetFest provides their unique platform. We always push to raise the bar every year, since we launched in 2008, because the demand is huge for us to do more to showcase the incredible ‘under the radar’ talent that wouldn’t otherwise have the chance to showcase themselves to a wider audience.  StreetFest has innovated and grown every year and it’s been truly exciting to take our maverick collective of creatives on the road to Leeds to start the summer. Over the years, StreetFest has taken place in some outlandish locations, car parks, garages, closed off roads, car pounds, warehouses and derelict wharfs over the years. I can’t wait for our homecoming in east London, this one will be the best and most ambitious and sees us collaborate and create that ‘Live arts moment’, bringing together the capital’s incredibly talented urban arts community, it’s going to be a roadblock.”

Shortee Blitz added “I’m looking forward to taking it back to StreetFest’s roots in east London at the end of summer. Major respect to StreetFest for staying at the forefront of street culture for so many years, which is testament to tireless commitment. It’s a great honour to be headlining in London.”