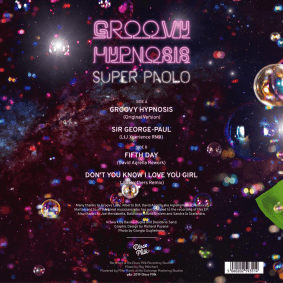 Super Paolo is back on his Disco Milk Records imprint with a joyous single entitled ‘Groovy Hypnosis’ including remixes from LTJ X-Perience, J&M Brothers and David Agrella.

Combining elements of jazz, funk, disco and house, Disco Milk Records have positioned themselves within the electronic music world as being a purveyor of soulful tracks with a focus on live instruments. Following ‘MSLU’ that picked up support from the likes of Elclair Fifi, Jacques Renault, Justin Cudmore and Harri, Super Paolo invites remixes from LTJ X-Perience, who began his career in the 80s and is known for releases on Far Out Recordings, Sleazy Beats and Apersonal Recordings and the Good Stuff Recordings co-owners, J&M Brothers who have releases on labels such as Defected, Hed Kandi, Salted Music and many more.

David Agrella, a London based producer who’s music has been championed by the likes of Cassius, Hot Since 82 and Steve Lawler provides a ‘Fifth Day’ rework delivering gratifying keys, soulful musical elements and stabbing synth flutters. J&M Brothers remix of ‘Don’t You Know I Love You Girl’ rounds off the EP with summer atmospheres fused with effervescent energies and joyous instrumentals.