Veteran producing trio Swanky Tunes returns to Protocol Recordings with the official release of their party anthem “Game Time,” which is made for amping up your pre-club festivities. They joined forces with Nssnd and UK rapper LexBlaze for the energetic, dancefloor-ready track, which Nicky Romero has been playing in his sets at Ultra Music Europe, Untold Festival, Tomorrowland and many more throughout the year. “Game Time” delivers driving, bouncy basslines, a bit of UK garage-inspired melody and rap vocals, which fuse together for an unlikely but winning combination. The track is Swanky Tunes‘ second Protocol release, following their “Virus,” and debuts Ukranian DJ/producer duo Nssnd and LexBlaze on the label.

With their dynamic, energetic, and dancefloor-friendly sound, Swanky Tunes has been making waves in the electronic music world for the better part of the last decade. Ranked at #27 by DJ Mag’s Top 100 in 2016, the trio’s ability to make music that resonates with a diverse audience has earned them numerous chart-topping releases, Hollywood features, and a global audience. Their singles “Til the End” and “Far From Home” with Going Deeper have respectively amassed 11M and 12M streams on Spotify, while their iconic track “Here We Go” was featured in the movie “Fast & the Furious 6.” Swanky Tunes‘ high-profile collaborations have included the likes of Tiësto, R3HAB, Kaskade, Hard Rock Sofa and more. When they’re not in the studio or running their own label Showland, the guys can be found playing worldwide stages like Ultra Music Festival, Tomorrowland, TomorrowWorld, Electric Zoo, Sensation, Electric Daisy Carnival, Global Gathering, Alfa Future People, ElectroBeach and many others. Despite their massive amount of experience, Swanky Tunes aren’t getting jaded anytime soon – this is only the beginning of the next wave in their exciting career, so keep an eye out for more new music and show announcements coming soon. 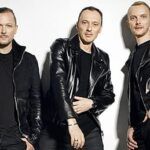