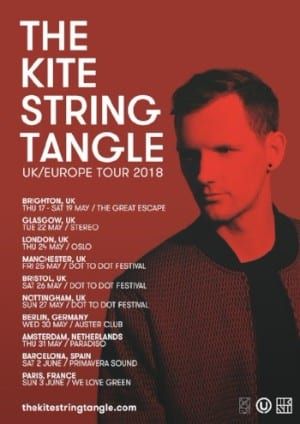 Danny Harley, aka The Kite String Tangle, has announced his eagerly anticipated European tour, with the Australian triple threat singer/producer/multi-instrumentalist bringing his live show to the Northern Hemisphere for a 10-date run across May and June.

The ARIA-nominated artist, who debuted his self-titled album in 2017 via Exist Recordings and Warner Music Australia, will kick things off in the UK from 17-19th May as part of The Great Escape Festival in Brighton. He’ll then visit London and Glasgow for headline club shows, followed by Manchester, Bristol and Nottingham for Dot To Dot Festival.

With further headline dates already locked in for Berlin and Amsterdam, Harley will head over to Barcelona for Primavera before rounding off the tour on 3rd June at We Love Green in Paris.

Following his recent sell-out tour of his native Australia, The Kite String Tangle has amassed over 18 million Spotify streams on his popular hit ‘Arcadia’ with singles ‘Selfish’, ‘The Prize’ (feat. Bridgette Amofah of Rudimental) and ‘This Thing We Got’ all proving triple j favourites, surpassing a total of 50 million streams.

Handpicked by Fatboy Slim to remix the latter’s seminal ’Praise You’ in December 2017, The Kite String Tangle has packed out the last 12 months with shows supporting ODESZA and London Grammar, as well as festivals and headline shows across Australia, Brazil, Argentina and Chile. This follows a strong international track record for the young Australian, having previously sold out headline shows across the US and UK and appeared at festivals including Coachella, SXSW and Taico Club (Japan).

With 2018 already shaping up to be a big year in his career, you can grab tickets for the UK and European Tour right here: thekitestringtangle.com*