Combining tropical African percussion, euphoric synths and Msiz’Kay’s impassioned vocals, ‘Happy’ is an inspirational club track with love and happiness at its core. The similarly upbeat official video is shot in Bulawayo, Zimbabwe, Msiz’kay’s hometown and captures him jovially walking the city streets, capturing the unbridled energy and joy that emanates from passers by.

Widely considered to be one of the best DJs in Brazil, Vintage Culture regularly sells out shows across South America and beyond, racking up over 1.2 billion streams across his back catalogue and receiving support from global stars like Tiesto, Martin Garrix and Diplo. ‘Slow Down  ft. Jorja Smith’, his remix with Slow Motion, has become a globally-recognized hit, scoring 70 million streams and becoming 3x platinum. Taking 2020 by storm, he has collaborated and remixed music from fellow global superstars Tiesto, David Guetta, Moby, Alok and Joel Corry already this year. He recently ranked #30 on the DJ Mag Top 100 list this month and also scored the #33 spot on 1001 Tracklists Top 101 producers list of 2020.

A similarly talented Brazilian dance music tour de force, Fancy Inc is a duo composed of Adriano Dub and Matheus R. As well as SPINNIN’, they have released tracks on a string of revered electronic labels, such as Musical Freedom, Soma and Abode. ‘In The Dark’, their 2019 collaboration with Vintage Culture, has racked up 32 million Spotify streams.

Combining house and techno with ‘native elements’, Drunky Daniels are another Brazilian duo who are leaving their mark on the dance music scene. Released last year, their debut album Zabumba mixed the organicity of Brazilian instruments with Afro-futurist aesthetics, and was crowned Traxsource ‘Album of the Week’ upon its release.

Msiz’kay is the pioneer of a style of music he describes as ‘Something Afro’, a blend of hip-hop, R&B and various traditional African music elements that delivers a unique sound designed to appeal to people from all walks of life.

Channelling a powerful message of positivity, ‘Happy’ is more than just a club track. 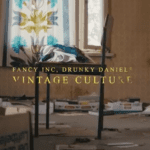