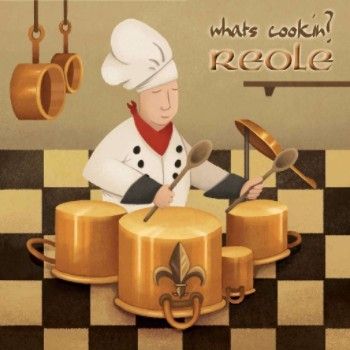 Funkmaster general Reole is following up his dazzling album ‘Hear Come The Drums’ with an equally incredible offering ‘What’s Cookin.’ The album is a warm homely feeling album that is honest and not over spiced. The cooking music part is equally influenced by cooking food. We suggest cooking up one of his fantastic recipes while blasting this brilliant record on full volume.

Watch ‘Got Your Back Girl’:

Reole started his musical life playing brass in Mardi Gras parades. Later, once back in Scotland, he then set about the airwaves with Ritchie Ruftone on pirate radio and pioneered the introduction of illicit underground Broadcasting across Europe – from Scotland, Germany and beyond.

A harmonious multiculturist, Reole is a huge American football fan and that energy and passion comes across in his music. The number 13 has always been his address, is his lucky number and his albums all have 13 tracks.

Reole also runs Turntable Training Wax which demonstrates his dedication not only to the performance of music but to its preservation of vinyl for future generations.

‘What’s Cookin’ is sure to set ears twitching and tummy’s rumbling everywhere with its blend of instrumental funk, jazz and classic rock. It’s an album with subtle touches and fantastic production.

Get hold of what Reole’s been cooking up on December 4th.